The ninth of these funny Jule-lads is Bjúgnakrækir, he arrives down from the mountains on the 20th of December. His trait is to steal homemade sausages that traditionally hung from the kitchen rafts. 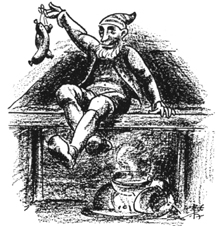 His brother Gluggagægir was the tenth to arrive on the 21st of December. He may be the creepiest of them all because he had the habit of looking in through people’s windows looking for something nice to steal later on.